anyone else having trouble the last few days getting Fidelity transactions? It is giving me the error of Unexpected site error - so Tiller can’t login to Fidelityrewards (I can directly though). 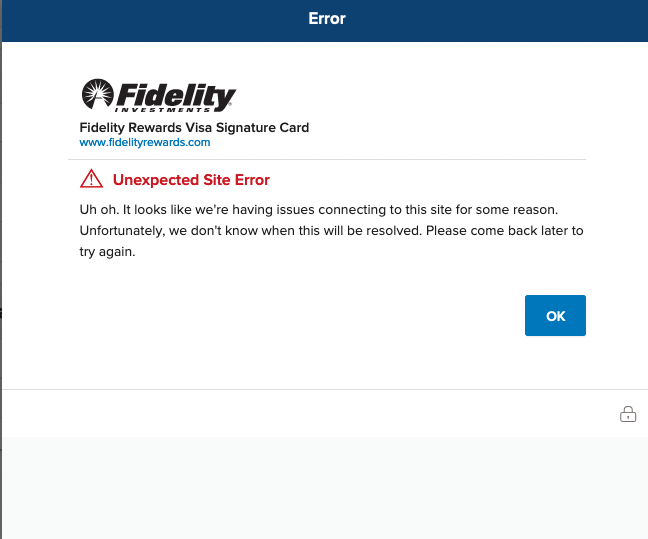 awe - thanks…why would I still be able to login directly though?

I don’t understand the details of how the backend works, but I can confirm from past experience that being able to login directly to the website isn’t related to if Yodlee (Tiller’s data provider) can access it.

My Fidelity card has not been updated through my main Fidelity account for 76 days. I’ve been hoping this would get resolved, but at this point I want to make sure I don’t lose any transactions (primary goal). A secondary goal is to manage this with the least hassle.

I manually downloaded the transactions and followed the instructions to prepare them for pasting into my Transactions tab. Took maybe 10 minutes. I also added “manual upload” in the Notes column in case these become duplicate transactions at some point.

@yotommy thanks for the update here.

We’ve been having some confusing issues with Fidelity visa cards this year.

First, the cards were not pulling transactions from the normal Fidelity site, but folks were able to get them if they connected a separate Fidelity Rewards Visa site (so added as new account), which created a duplicate of the visa account on their Tiller Console Account Summary.

Then something happened recently where the normal Fidelity site was pulling them in again. We’re not sure exactly what’s going wrong there but if you’re still not getting them from the main Fidelity site (the login where you see investments too if you have those) you can try connecting to the Fidelity Rewards Visa site.

Now, the Fidelity Rewards site is blocked (Tiller screenshot attached). Any update on this? 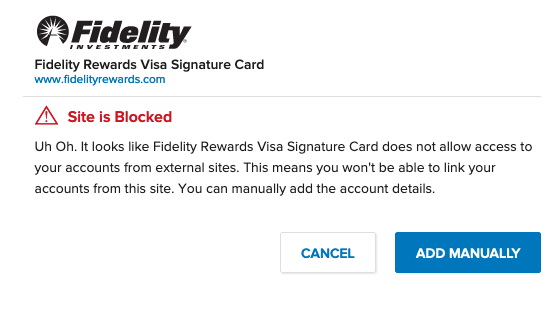 Much like everyone else, having issues. If I disconnect the fidelity rewards connection and try pulling transactions from the main fidelity account, will it duplicate transactions for the past 60-90 days?

There is now an outage with the Fidelity rewards visa site. We’re not aware of whether it’s going to be permanently disabled, but folks are now reporting they can get the transactions from the main Fidelity Investments site again. You would possibly get some duplicates, yes.

Any news on this? I’m running into the same issue.

I switched to using my fidelity access to load the accounts. Saw elsewhere about logging into the elam? elan? finance webpage as the fidelityrewards website has blocked access.

I switched to using fidelity investments and that’s working for me. Also, no duplicates!

I have had no problems with Fidelity downloads and Fidelity Visa downloads for quite awhile.

My Fidelity login credentials get all account activity except the credit card.

Our Fidelity Visa credit cards (we each have a card in our own name) are linked to Tiller as an Elan Credit Card using the login info that we use at www.fidelityrewards.com. This is a different link than the Fidelity Rewards link that people are reporting as being blocked.

Elan Financial is the issuer of the Fidelity Rewards Visa card.

My Tiller Console has 1 link to Fidelity Investments that pulls data for 10 accounts, and 2 links to Elan Credit Card that pull data for 2 different credit cards. We also have links to other banks which also are working without problem most of the time.

Best recommendation right now is to pull the accounts through the Fidelity Investments site. If the transactions aren’t flowing for the credit card accounts when connected through that site, please reach out to our support team via the chat window in the lower right corner of the Console at https://sheets.tillerhq.com/auth/login